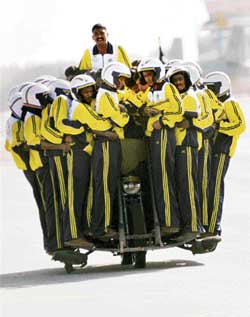 Tornadoes – the Motor Cycle Display team of the Army Service Corps (ASC) on Sunday broke two world records by being the only team in the world to achieve a distance of 1,100 metres with 54 persons on a single moving 500 CC Enfield motorcycle by covering a distance of 925 metres.

The team smashed the record set by the Corps of Military Police team which carried 48 persons on a single moving 500 CC motorcycle recently in Bangalore.

The Tornadoes was raised in 1982 after its stupendous display of daredevilry during the 1982 Asian Games and since then the team has rewritten various records.

At one point the team had achieved the distinction of holding seven world and national records of varying degrees of sports and adventure. They entered into the  World Records in 1992, 1994, 1995 and 2000 for carrying 93, 111, 115 and 181 persons respectively on 11 motorcycles.

In 2005, the team set a world record by carrying 37 persons on a motorcycle which was registered in the World Records