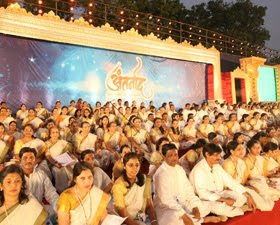 Antarnaad, a grand Hindustani classical musical symphony hosted by the Art of Living foundation in Pune on January 12 this year was awarded an entry into the Guinness Book of World records.

The citation issued by the Guinness World Records Ltd, reads, “The record for the largest simultaneous sing-along was organised by The Art of Living Foundation (India) and involved 104,637 participants singing ‘Vande Mataram’, India’s national song, at Antarnaad in Pune, India on 12 January 2010”.

A copy of the citation is attached as well as a video excerpt of the event.

The aim of Antarnaad was to showcase the vast, masterful repertoire of Hindustani classical music as well as to provide a platform to bring to the fore the talent of the exponents of this ancient Indian art.

Stating that classical music and spirituality are among the most definitive and unique offerings India can make to the world, AOL founder and humanitarian, His Holiness Sri Sri Ravi Shankar had said at the event, “Spirituality and music together can uplift people, get them out of depression and help them start a new life with enthusiasm. For a stress-free life, you have to embrace both these facets (spirituality and music).”

Musicians from across the country, celebrity singers like Shankar Mahadevan and renowned names like Pt Rajan & Sajan Misra were also part of this historic event.

The Art of Living had earlier entered the Guinness Book of World Records with 1200 Mohiniattam dancers performing together on one stage in Kerala in 2006 and for its historic sitar concert titled Brahm Naad in New Delhi in Nov 2008, which brought together 1094 sitar exponents on one stage, in aid of the Bihar Relief and rehabilitation.