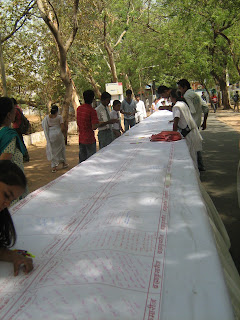 The citizens of Ahmedabad conveyed their feelings of gratitude and also asked for blessings to remove poverty, terrorism, corruption and other evils from the world by writing a letter to God.

The spiritual organisation has initiated the process to register the event in the Guinness Book of World Records, Limca Book of Records, Asia Book of Records and World Amazing Records for it is the longest letter in the world. Earlier, around 2,000 students of Romania had written a 1358 feet long letter to Santa Claus on November 28, 2009. 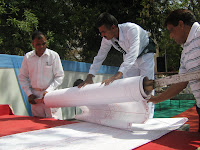 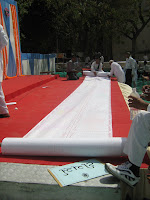 Speaker of Gujarat Assembly Ashok Bhatt said that terrorism and other issues have thrown a challenge to spirituality and in such a scenario, the name of God is the only source of peace and prosperity. While Rayogine Ratan Mohinji, co-chief coordinator of the youth wing of Brahmakumaris, said that such events would teach people the art of writing letters to God.

It was quite a different experience, said Jayesh Makwana, a teacher. He participated in the event with his parents. “Words cannot describe my feelings but I could easily find words to express my gratitude towards God for creating a wonderful world,” said Makwana. 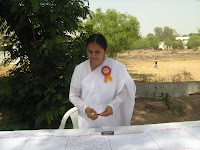 MCA student Mauli Oza said that instead of demanding anything from herself or for her family, she asked God to create a world free of all evil. “Whatever little I have achieved in my life could not be possible without God’s grace, so I thanked him,” she said.

Longest Letter to God World Record Event Coordinate by Ms. B.K. Ishita, she is in charge of Brahmakumari, Navrangpura Center, Ahmedabad, India and Mr. Lalitbhai from Mount Abu Branch also present at the place of event.