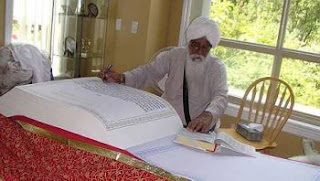 Jaswant Singh Khosa has accomplished a rare feat – he has completed his fourth hand-written copy of the 1,430-page Sikh holy book, which is possibly the largest and heaviest in the world.
His fourth hand-written copy of the Guru Granth Sahib weighs 84kg and is 91.44cm in length and 66.04cm wide, breaking his previous Malaysia Book of Records for his second copy which weighed 45kg and was 76.2cm long and 48.26cm wide in 2004.
“It is a labour of love. The (latest) book is 182.9cm long when it opens up. I wrote for 14 hours a day. It was worth it,” he told The Star.
The 73-year-old took 14 months to complete his fourth hand-written copy which he donated to a Sikh temple in the United States.
A Sikh temple in Amritsar, Punjab had replaced its 200-year-old holy book and is currently using Jaswant’s second hand-written copy, which he had also donated.
The third copy, which is the same size as the second, was given to a Sikh temple in Canada in 2007.
His first hand-written copy, a smaller version, was donated to a Sikh temple in London in 1998.
All four copies were in traditional Gurmukhi calligraphy. Currently, most copies of the holy book are printed.
“I am not getting any money for it nor am I doing it for fame. Someone even offered C$200,000 (RM651,532) for my third copy but I refused,” he said.
Muar-born Jaswant, who wrote the latest copy in Freemont City, California, spent about two-and-a-half hours writing each page without even a toilet break in between.
“When I start writing a page, I shut everything out and write continuously until I am done. I have to write it exactly as it appears in the original copy,” said Jaswant who planned to make a submission to the Guinness Book of World Records.
However, the arduous task of sitting and writing for 14 hours a day has left him with a bent back and feeble legs.
But he has refused to give up and after undergoing treatment here, plans to write his next copy.
“The doctor warned that I could be paralysed but it has been my dream to complete four volumes just as Baba Deep Singh (renowned Sikh scholar and warrior) did more than 300 years ago.
“I will still write even if I end up in a wheelchair,” said Jaswant, who now walks with a limp.
Jaswant, who went for an amrit (baptism) in 1992 before he started writing, remained humble despite his feat. “This is truly God’s blessing and his special gift. It is not me,” said Jaswant.
Tags: Books Publication