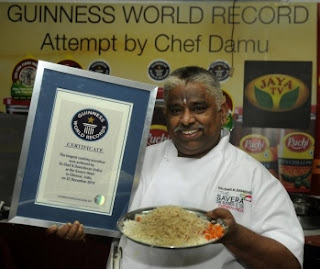 After cooking up as many as 617 dishes in over 24 hours, an overjoyed Chef K. Damodaran sets a new Guinness World Record. Chithira Vijaykumar, who watched the feat awestruck, reports.

Or, to be precise, 24 hours, 30 minutes and 12 seconds. And miraculously, Chef K. Damodaran is still standing. And looking sprightly even.

He holds his Guinness World Record for ‘Longest Cooking Marathon — Individual’ plaque a little higher, and smiles broadly. “I never practised this stunt you know. Not one dry run.”

Lucia Sinigagliesi, the judge from Guinness, is astonished as well. “I slept all night, and I’m exhausted. Look at that man go!”

It all began on December 21, at around 8 a.m., when the renowned chef first set himself up in front of six cooking ranges, from where he would not move for an entire day. Under the watchful eyes of Lucia and television cameras that recorded the entire stunt, Damu initially planned to make about 480 dishes.

We watched him work, solemn throughout, except every time he would finish a dish. Then, Damu would break into a brilliant smile, and happily urge onlookers to try it. Forty-three minutes into the event, 10 dishes were done. Seventeen minutes later, almost inexplicably, the tally was at 20. There were idlis, dhokla, rasams, payasams, pakodas and chips. So were intriguingly titled things such as Chicken Xacutti and Oats Jinga 65. And everything from crab pepper soup to kozhukattai.

The rules were simple, but severe. Damu was allowed only a single five-minute break every hour. While he could use ingredients that had been previously marinated or chopped, he had to have at least two dishes cooking at any given time. (He had six. “He’s making it harder on himself!” Lucia had remarked.)

As he cooked, the dishes would be passed out among the onlookers, because the rules also state that everything has to be edible. “’Edible?’” laughed Lucia. “It’s delicious!”, and gladly tried everything that came around. She swooned over a vadai, and Damu graciously offered to give her one of his recipe books.

The spectacular in Damu’s cooking is its simplicity, the way the ancient scents of traditional kitchens wafted from the clinical space of a four-star hotel. And we’d left him the day before, nonchalantly flipping a paratha, two-and-a half hours into the challenge.

“It was when about 12 hours had passed that I first began to feel restless. My limbs were heavy, sore. Fatigue hit me like a brick wall.” Damu almost stopped. “But then, along came about 60 of the staff from Savera Hotel — they danced, laughed and sang for me. It kept me going.” At the peak of his exhaustion, Damu averaged a new dish every two-and-a-half minutes. “It was all done entirely manually. No oven, no microwave,” says Malarmannan, a chef himself, who was one of those who assisted Damu through the long day. Damu was allowed four helpers, who wouldn’t, of course, be allowed to do any of the actual cooking. “And each one of them gave their heart and soul to this. Not one of them slept, not one left, even when their shifts were over,” says Damu.

But what he’s happiest about, is that every single dish he cooked is gone, having vanished rapidly into the admiring crowds that came to watch Chef Damu work his magic. All 617 of them, almost as fast as he could cook. Clearly, they really did pass the ‘Edibility’ challenge.