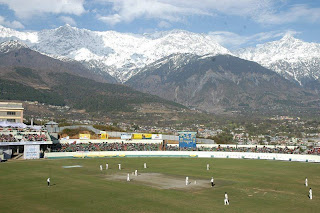 The second edition of the Jaypee Twenty20 ‘Mahasangram’, a local version of Twenty20 league and billed as the world’s largest cricket tournament, began in Himachal Pradesh Monday, an organiser said here.

He said 150 matches would be played daily at 75 grounds that have been improved and developed by the HPCA.

“Nearly 19,000 players would showcase their cricketing skills in the tournament that would see 2,000 matches. Around 500 officials of various cricket bodies are on duty to supervise the matches,” Sood added.

Last year, 14,300 players from 1,017 teams participated in the tournament and matches were played at 60 places. Cash prizes of about Rs.30 lakh were distributed among the teams and the players.

The HPCA is spending around Rs.70 lakh on the tournament. Of this, Rs.30 lakh would be given as cash prizes to the winners, Himachal Pradesh Congress Committee chief Anurag Thakur said.

Teams even from the remotest parts like Pangi, Bharmour, Holi and Tissa in Chamba district, Leo, Spillo, Sangla and Kalpa in Kinnaur district, Sissu and Udaipur in Lahaul and Spiti district and Shillai in Sirmaur district are participating.

“We have got the maximum number of 226 teams from Chamba district, one of the remotest and most backward regions in the country,” Sood said.

The event, he said, would enter the Guinness Book of World Records.

“Officials of the Guinness Book of World Records have decided in principle to include this tournament as the biggest cricket show on earth,” he added.

The semi-finals and the final would be played under lights at the HPCA Stadium in Dharamsala. The picturesque stadium, situated nearly 4,000 feet above the sea level, has already hosted two Indian Premier League (IPL) matches earlier this year.