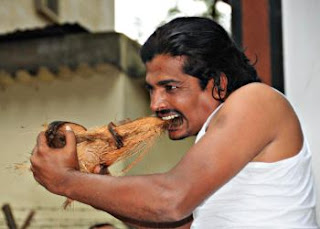 Earlier, he had made a record of pulling a Maruti 800 car by his ears.Varma also claimed that he can climb 40 feet coconut trees holding a bicycle in his mouth, and can even balance a motorcycle for half-an-hour without holding or touching the handle.“There is a world record of peeling 51 coconuts using the teeth. My name has been enrolled in Limca Book of Records for pulling a Maruti 800 car from my ears. I can climb a 40-feet coconut tree holding a bicycle in my mouth, said Varma.“I can even do stunts on a running motorcycle for half-an-hour without holding it. I want to set a record in Guinness Book of Records, and for I have been practicing hard with coconuts,” he added.