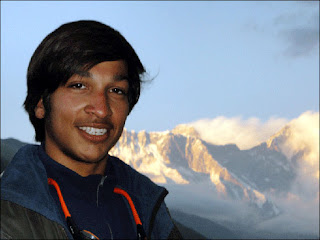 Arjun Bajpayee, a 16-year-old Delhi school boy, on Saturday had a brief tryst with destiny equaling the world record of being the youngest to step atop the world’s highest peak – 8,848 metre Mt Everest, only to have his feat overturned hours later by a 13-year-old American.

Bajpayee, became the youngest Indian to climb Everest early this morning via the traditional South Col route in Nepal. He equalled the record of a Nepalese Sherpa Temba Tsheri who also climbed the peak when he was sixteen.

But a few hours later, a 13-year-old Californian boy Jordan Romero broke his record by climbing the peak from the tough North Eastern ridge route in Tibet.

The Californian is on a quest to climb all the highest peaks in the seven continents.

The two youngsters could have had a tryst atop the world’s highest summit, but apparently missed each other by a whisker, as Bajpayee after a short stay atop made his way back for a descent.

Bajpayee climbed the peak at 0633 hours on Saturday morning in the company of Apa Sherpa, who became the first man to climb the peak for the record 20th time. The world record for the highest number of climbs on Everest also earlier stood in his name.

Along with Bajpayee, also making it to the top was another Indian woman Mamta Sodha who reached the summit at 10:24 am, four hours after the young Indian.

Earlier on May 17, two other Indian climbers had reached the summit.

Arjun, a Class 12 student of Ryan International School, completed a basic course in 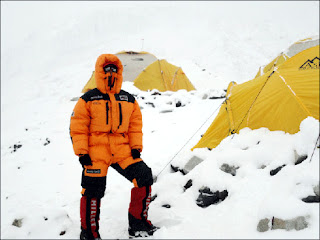 mountaineering from Nehru Institute of Mountaineering at Uttarkashi and after taking part in a number of expeditions to peaks over 6000 metres high set his sights on Mount Everest.

Arjun was accompanied by a 12-member team, nine of whom were from US, Denmark, Switzerland and Australia while the remaining three were Indians.

The team was led by Apa Sherpa who has scaled the summit a record 19 times. In fact, the expedition was also aiming to carry the ashes of first Everester Sir Edmund Hillary, to bury them atop the summit.

But, the proposal was given up as it touched religious chords of the Sherpas, who reside on the foothills of the peak.

The Delhi School boy broke the record of Krushnaa Patil,18, from Maharashtra who became the youngest Indian to reach the highest peak in 2009.

Arjun began his quest in April, when his team set up their base camp at the Khumbu Glacier. The team spent another 40 days acclimatising.

The team set up three-to-four high altitude camps before making the epic summit bid on Saturday.