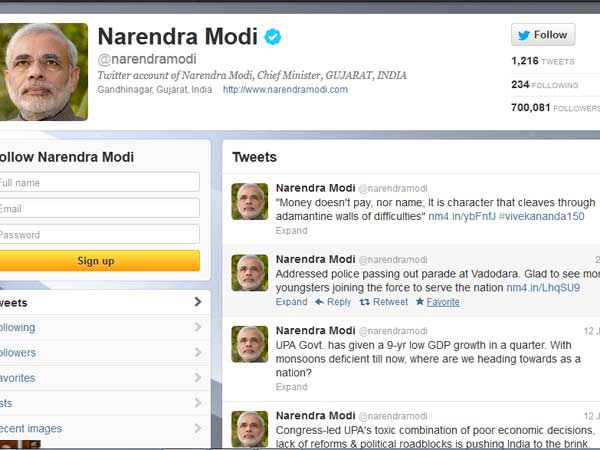 Gujarat Chief Minister Narendra Modi, who is among the most active politicians on social media is something that is well known across the board. Today adding another feather to his social media popularity, Modi’s followers on Twitter crossed the 700,000 mark.

The pace at which Narendra Modi has been gaining popularity on Twitter is something that should be taken note of. Modi started tweeting back in 2009 and has been among the pioneers of this form of social media among Indian politicians.

Consider this- Back on 11th November 2011, Narendra Modi’s Twitter followers crossed the 400,000 mark. The jump from 400,000 to 500,000 came on 3rd March 2012 and by this time Modi’s Twitter page had undergone rapid transformation. He took the step of actually ‘following’ select political leaders, news websites and most importantly well wishers and volunteers. Commemorating Swami Vivekananda’s 150th birth anniversary, Modi even decided to Tweet a quote of Swami ji daily, a practice that will continue for an entire year. These quotes have generated a great response from the netizens.