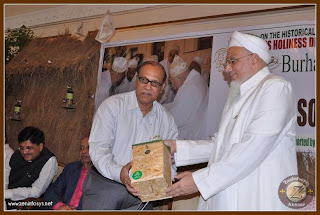 In the hope of bringing the once common house sparrow back to Bengaluru, Burhani Foundation (India) distributed 500 bird feeders at the Burhani Masjid in Gottigere, off Bannerghatta Road on 6th March. Across the country, fifty-two thousand bird feeders were distributed as a part of centenary celebrations of the birth of Dr. Syedna Mohammed Burhanuddin, Dai-al-Mutlaq (spiritual leader) of the Dawoodi Bohra community. His birthday falls on 6th March, according to the Gregorian calendar.The distribution was taken up in association with Nature Forever Society, an organisation working for the conservation of house sparrows.

Hundreds of people irrespective of theirs faiths gathered to receive bird feeders. Nigar Ataulla, a journalist, says it was her love for the sparrows that brought here there all the way from Austin Town. “People have become busy with their lives to notice such changes as the sparrows vanishing but a small effort such as this can go a long way,” she said.

For Anbu Chezhian, it was an opportunity to encourage his three-year-old son to take up environmental issues. “We are fond of nature and undertake activities such as this at home. We are trying to inculcate the same in my son,” said Chezhian, a resident of Eagle Ridge gated community on Bannerghatta Road.

Feroze Totanawala, media representative of Bangalore’s Dawoodi Bohra Community said that one of the reasons for the disappearance of sparrows is the lack of food sources for them. 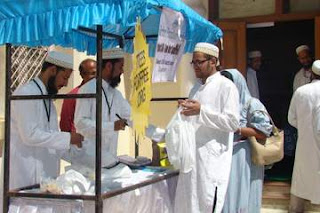 Totanawala said, “Sparrows need grains. It is not found in the open anymore in the city. Through these feeders, we are hoping to slowly get them back in to the city.” He added that the feeders were distributed in Mumbai, Pune, Chennai and many other Indian cities as well. The event was also an attempt to enter the World Records for the maximum number of bird feeders distributed in a day. The results will be known soon.

The distribution of 500 bird feeders was scheduled to go on from 10 am to 2 pm but the due to the overwhelming demand, all of them were distributed within two hours.  ‘To all those people who did not get a bird feeder, they have left their details with us and they will be provided with one when fresh stocks arrive”, Totanawala said.