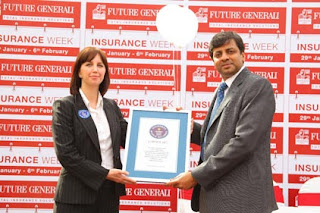 FGIW was observed between January 29 – February 6 that was conducted across 103 Future Group retail outlets across the country and over 190 Future Generali branches.

FGIW marked its successful culmination by gaining entry to the Guinness Book of World Records for the longest balloon chain in the world.

This 20 km. long chain formed by balloons signed by people, who committed to getting adequately insured and thereby ensuring the security of their loved ones, through the FGIW.

Balloons collected till the end of the FGIW campaign were filled to form the longest balloon chain in the world, earning Future Generali and Big Bazaar, a place in the book of world records.

Insurance penetration in India is just 2.53% in life and 0.61% in non-life insurance (annual premium paid as % of country’s GDP). In terms of Insurance density, the numbers are even more alarming – in developed nations like the U.S is it is 33 times, that of India, the UK is 73 times and Japan is 65 times. Even a country like Thailand is double than that of India.

“The fact that we rank a lowly 12th In Asia is alarming, considering that we are amongst the fastest growing economies. With such a sad state of affairs, the so called young India we celebrate and talk about will probably be a middle aged/old India just 15 to 20 years down the line, with little or no Insurance,” said a company spokesperson.

All through the Future Generali Insurance Week (FGIW), customers and prospects at 103 Big Bazaar outlets & over 190 Future Generali branch offices across the country were engaged to sign a white balloon as a symbol of their pledging to ensure the protection of their loved ones with adequate Insurance.

By the end of the week, Future Generali has received over ten lakh signed balloons, displaying a tremendous response from people across age groups.