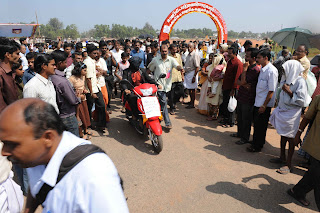 M.S. Malavika, 12, who has already excelled herself as a junior magician will undertake a more adventurous feat on Sunday by riding a motorcycle three km blindfolded. The feat will be along the Asramam-Kappalandimukku four-lane road. She told presspersons here on Saturday that the feat was being conducted to spread the message of awareness against terrorism and use of Endosulfan. The programme will be inaugurated by Mayor Prasanna Earnest at Asramam at 10 a.m., and the motorcycle will be flagged off by District Collector Devendrakumar Dhudawat.

She is Students of the Government Highschool pooyap pilli, in the destrict has already been in the limelight as contestant of the munch Star Singer 2010, a popular reality show.
She was also a kalaprathibha at the district level school festival.
They said Malavika had already presented magic show over 400 stages.

Malavika said that it was to propagate the message against extremism and against use of endosulfan that she had undertaken the challanging task of riding two wheeler blind folded.