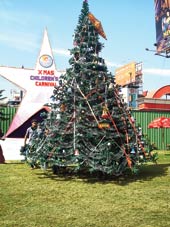 A Hyderabad innovator who put together an office from vintage car parts has branched off — into making Christmas trees.

K. Sudhakar Yadav’s new creation is a 20×13-feet tree mounted on a tricycle powered by four pairs of pedals that gives viewers the impression that it is floating around, and has been inspired by his 12-year-old daughter Stavya.

“I created this for my daughter,” said Sudhakar, whose office nameplate spells his name as “Sudhacar” to reflect his unflagging zeal for automobiles.

His Christmas contraption is also green, in the ecological sense. “There is no motor in the cycle. I believe all beautiful things needn’t necessarily pollute the environment.”

Although the moving tree has not outgrown the world’s biggest floating Christmas tree, 85 metres tall, in Brazil’s Rio de Janeiro, Hyderabad can still savour the fruits of the freewheeling entrepreneur’s zeal for the unusual.

Sudhakar displayed his latest creation to the public outside a Hyderabad multiplex early this evening.

A four-seater, the Christmas tricycle can travel 10km per hour. Riders are hidden under the tree. It has everything that goes with a cycle —the handle, hubs, brakes, chains, sockets and light cast aluminium wheels.

The Christmas tree is the 27th creation by Sudhakar, who entered the Guinness World Records for making the longest tricycle and the Limca Book of Records for the smallest double-decker bus. This isn’t the first time he has tried something with tricycles: he came up with a giant moving football to coincide with the World Cup this year.

Cars, though, seem a life-long passion. The maker of stiletto car, lipstick car, compact car and even a computer-shaped car is eyeing new milestones. “In another eight months, I plan to add a book car, pen car, pencil car and a sharpener car to complete the catalogue, which I wish to dedicate to women and children,” said Sudhakar.

His office, entirely designed with spare parts of Ford Model T, Austin, Lagonda and the 1937 Buick, still remains a big draw for those who have heard of it. The sofas are made of 1930 Buick and Ford Jalopy parts. The central table is made of the body of a 1927 Austin. The focal point of the office, his massive desk, has been crafted from a 1908 Ford Model T that had put the world on wheels at the beginning of the last century.

But Sudhakar is hungry for more. “I plan a car-shaped dinning table that can be assembled in 10 minutes.” 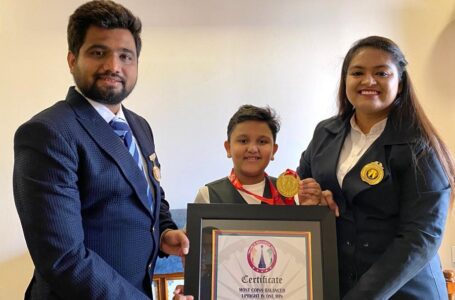 MOST COINS BALANCED UPRIGHT IN ONE MIN 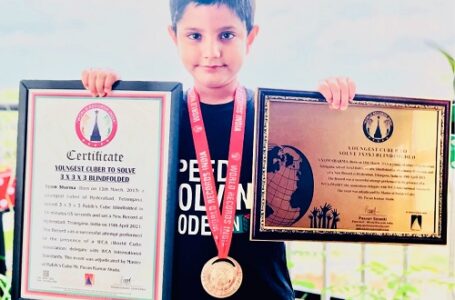