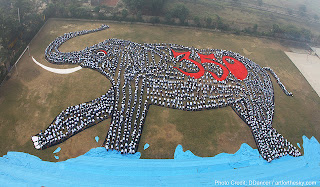 Today, 3,000 Ryan International School (Rohini) children joined aerial artist Daniel Dancer in New Delhi to form the image of an elephant to remind their leaders that they can’t afford to ignore climate change – the elephant in the living room.
On October 22 of this year, India’s Environment Ministry, Jairam Ramesh, declared the elephant a “National Heritage Animal” to highlight it’s unique role in India’s history, culture, and ecology. It is for that reason that thousands of school children came together to form a giant image of an elephant in the country’s capital as a symbol of India’s wish to preserve their history, culture, and ecology by countering the threat of climate change and taking actions that can lead the world back below 350 ppm CO2.
Like the tiger and other fauna of India and South Asia, the elephant, too, is affected by climate change. Increased drought from climate change as well as increased competition with humans, both as a result of development practices and climate migrations, could lead to significant loss of habitat. Not only is that bad news for elephants, but these habitats are now some of the vital remaining carbon sinks across the globe. If lost, it would further exacerbate climate change. Other potentially disasterous repercussions would include the rising seas along India’s coasts.
Many thanks to Daniel Dancer, the 350 India team, the Ryan International School, and everyone who joined the event!
Tags: Art Work Ryan International School