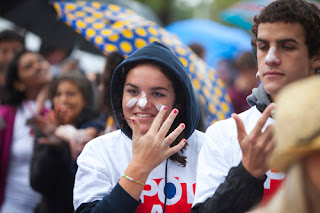 Supporters of the Spot A Spot project gathered on campus Nov. 20 to break the Guinness World Record for most people applying sunscreen in one location at one time.

There needed to be 252 participants, but there were only 152.

Despite pouring rain, Spot A Spot representatives from UC Irvine and Cal State Fullerton and sponsors set up booths and handed out information to those who came for the event, or those who walked by.

“The purpose of this is to raise awareness of the effects of sun damage and the need to wear proper sunscreen,” said Tricia Trimble, 41, president of Suntegrity Skincare, sunscreen sponsor for UCI’s melanoma walk.

Trimble started the company because her mother died from melanoma.

Spot A Spot is part of a cancer prevention program for young people, which goes to high schools and middle schools to teach youth about the dangers of sun damage to the skin, said Lennie Sender, 52, director of the Adolescent and Young Adult Cancer Program at CHOC Children’s Hospital and UCI.

“Melanoma, which is the most malignant skin cancer, the most dangerous skin cancer, occurs in young people,” Sender said. “Skin cancer is the number one cause of death as a disease under the age of 40.”

The project was started to honor a UCI second-year medical student, Joel Myres, who died from melanoma in 2001. Since its foundation, the group has spoken to thousands of students in Orange County, according to the Spot A Spot website.

Although it was founded at UCI, Spot A Spot has spread to CSUF as well. Part of the UCI chapter and the CSUF chapter worked together to put the event on.

“We started working with a group of CSUF students. They call themselves Kinergy. They had this idea of, why don’t we try to break a world record just so we can get Spot A Spot out there and let the public know that Spot A Spot is here,” said Amelia Ahmed, UCI Spot A Spot chapter representative.

However, with the weather hitting near 60 degrees and the rain at a constant shower, as well as the event taking place the first day of Thanksgiving break, the turnout was less than expected.

Regardless, the 152 students and supporters gathered in a roped off area in front of the Student Recreation Center and applied sunscreen under hooded jackets and umbrellas for two minutes.

“Maybe we could just break a record of how many students put sunscreen on in the rain,” Ahmed said.

Although the record was not broken, the Spot A Spot representatives were optimistic about the information they handed out. To them, if any life can be saved, it is a job well done.

“I think there’s a lot of people who go out and bake in the sun and don’t think it’s any big deal, and in essence, there’s foundations that have started for girls who have died at age 20 because of melanoma skin cancer,” Trimble said.

As the president of Suntegrity Skincare, she has developed a nontoxic version of sunscreen that also has an internal vitamin D3 supplement.

To get involved with the Spot A Spot or the National Melanoma Awareness Project at CSUF visit SpotASpot.org.