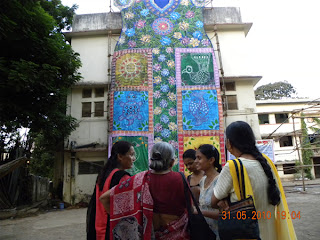 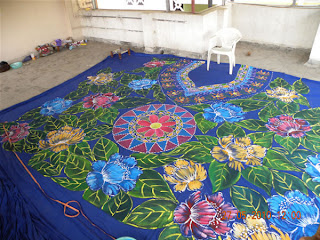 A 40-feet high and 20-feet wide kurta painting made by Manisha Ogale of Thane — which took a total of 29 hours, 25 minutes to complete — is now being considered for the Limca Book of Records. Ogale’s creation is being exhibited at the New English School from May 31-June 5 in Thane.

Ogale, a talented painter, said, “Painting is my hobby and I wished to have my name entered into the Limca Book of Records for a great creation. I started my work on the May 26 after I spoke to the people in charge on May 25. I made enquiries about the submission of records for the Limca Book of Records and was told that the last day to submit would be on May 31. I really had very less time to complete the work that I had planned. I was thinking of painting a sari, but due to the time restrictions I instead opted for kurta painting,” said Manisha. “It took me 29 hours and 25 minutes to finish my creation. I used to work eight hours each day. It was really entertaining to make the kurta painting and I did not feel taxed even for a moment,” she said.
“The only glitch was that I had no help from anybody to work on the kurta. Also, I had no sponsors so I had to bear the expenses myself. But it was not much of a consternation. The people working for the Limca Book of Records said that they would get back to me after two weeks and give a confirmed reply on whether or not my name would be entered in the book,” she added.

The cloth Ogale used for the painting was 175 meters in length. The colours used was fabric paint which extended for about 10 m.