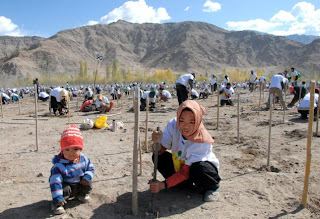 The ‘cold desert’ of Leh on Sunday entered the Guinness Book of World Records after 50,300 saplings were planted at a village here in less than an hour by 9,000 volunteers under a drive supported by Buddhist monks to mark the ‘green’ Commonwealth Games in Delhi.

Sunday’s programme was flagged off by Drukchen Rinpoche, chairman of the ‘Live to Love’ initiative, at 10 seconds past 10.10 a.m. (the date being October 10, 2010). The event was held in collaboration with the Commonwealth Games Delhi.

More than 15,000 volunteers reached Changa village, nearly 40 km from Leh town, in the morning, but only 9,000 were allowed to participate.

A team of three members from the Guinness World Records was in the village to monitor the event. Chairman and adjudicator of the team Tarika Vara announced that 9,000 people had successfully planted 50,300 saplings in less than an hour, a new world record.