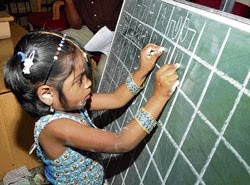 M Shalini, a LKG student at Rotary school in Mysore has a innate ability to write with both  hands at a time. Through her left hand she does a mirror writing, even as she is able to present the alphabet in a common way using her right hand simultaneously. She is able to write Kannada, English, Hindi, Tamil, Malayalam, Telugu, Gujarati, Assamese, Punjabi, Oriya, Tulu (recently created by a scholar), Urdu and Bengali alphabets.

She is the daughter of Latha and Manjunath, who runs a small provision store in Sunnadakeri in city. According to Manjunath, the girl developed a passion for writing when she was two years old. Her mother Latha taught her the nuances of the alphabets of various languages. “Shalini was able to write the Urdu alphabets with just  seven hours of practice,” he told Deccan Herald.

He explains that observing the interest of the child in alphabets, the couple decided to train her in multiple languages. About three months ago, she was able to write in four languages. Within a short span of time, she was able to acquaint with alphabets of nine more languages.  The couple taught her taking out a copy of the alphabets from the website. She can write from 1 to 200 in both the hands in real and mirror image at a time.

According to Manjunath, the girl can also write name of a person or place with both the hands simultaneously. She is also learning calligraphy from teacher Narayan.

Besides, she can render about 60-70 shlokas and short stories. Shalini also manages to draw two identical  and two different ‘rangoli’ and drawing in both hands. Recognising her talent, the Rotary school has also promoted the girl, even as many institutions and forums have honoured her.