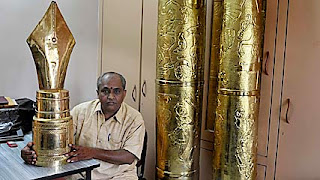 The pen is mightier than the sword, but a man in Hyderabad, India, has just made a pen that, in a pinch, could make a mighty fine weapon of its own.
Social studies teacher M.S. Acharya commissioned the construction of a 16-foot-tall, 1-foot-wide brass pen that he calls “Bharatiya Pali,” or “India’s Pen,” to honor the government’s passage of the Right to Education law.

The work of making the pachyderm-sized pen was done by two Hyderabad artists, Ratnam and Malikarajan, who etched various Indian dance styles and musical instruments all over it.

According to The Wall Street Journal, the trio started working on the pen in early February and spent nearly 450 working hours and 250,000 rupees (about $5,555 U.S.) getting the pen just right.

“We worked Monday to Saturday from 10 a.m. to 6 p.m. for a total of 56 days,” Acharya said. “And every penny that the pen cost has been paid from my pocket to these two artists, who have put tremendous effort and labor in completing this project.

“Since it is the token of our love and appreciation, none of us complained about undertaking so much effort.”

It started with sheets of brass, cut and soldered into 10 cylindrical structures. After cleaning the surface, the artists began etching.

So what do you do with such a large pen?

Well, it’s so big that writing the great Indian novel is probably out of the question, so Acharya plans to have it serve a more symbolic purpose: honoring India’s new Right to Education law, which guarantees education to every child, ages 6 to 14, by making education a fundamental right. The law came into force on April 1.