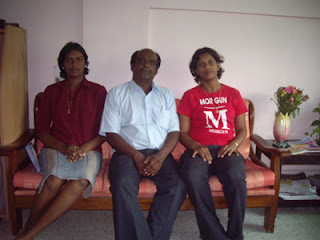 This mother-daughter duo has burnt the midnight oil, trying to understand the finer details of aviation meteorology and air navigation. From sharing a classroom to renting an apartment, they have been together through the requisite 200 hours of flying each needed to log for their commercial pilot license (CPL).
Today, 18-year-old Bavicca Bharathi and her 39-year-old mother Judith are proud CPL holders—one trying to establish her official status as India’s youngest commercial pilot, while the other is probably among the oldest women to have sought a pilot license. While Bavicca aspired to be a pilot from her college days, it was a matter of chance for Judith. In fact, it was her husband Pon Joseph’s idea that his super-active wife learn the craft as well. After all, Judith was a gold medallist in mathematics, but she gave up pursuing her masters after marriage.
“Initially, I wanted to go to Canada for the training. But dad didn’t want me to be alone and finally it was decided that mom would accompany me. However, she couldn’t sit idle for the six-seven months it would take me to get the license. So, she decided to give it a go too,” says Bavicca.
That’s when they zeroed in on Indore-based Yash Air for their pilot training. But for these Mumbaiites, getting used to the rural confines of Shirpur village—where they did their flight training—was a challenge. “We were so cut off from the outside world—no newspaper, no television, plus power cuts of nearly eight hours everyday,” sighs Judith. The silver lining though, they chorus, was the fact they had a support system in each other.
Securing jobs in the same airline is next on the agenda. But that’s proving to be a little difficult, given the age limitations of various airlines. For some, Bavicca is too young, for others, Judith is too old.
For instance, while Bavicca has interviewed with Air India, Judith cannot “since the upper age limit for pilots is 35 years.” Ditto with Indian. Interestingly, neither is eligible to apply for private airline Jet Airways as “the age limit is between 20 and 37 years. So neither of us qualify,” explains Bavicca. They are now keeping their fingers crossed for forthcoming interviews with Kingfisher Airlines.
“Our dream is to pilot a commercial flight together one day—with one of us in command and the other as co-pilot,” says Judith.
Tags: Air Pilot Airways Commercial Pilot