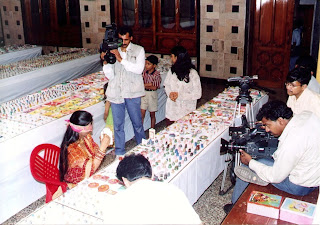 Rama Shah, 48, a staunch devotee of Lord Ganesha, made 999 idols in 24 hours at the SIES College of Arts – setting the new world record for the Most Ganesha Idols Hand Made Non Stop in 24 Hours.

Ms. Shah was blind folded and she made the first idol of Lord Ganesha to the utter surprise of students, staff and the public and everyone gathered clapped their hands in delight.

Shah continued doing the idols nonstop in different shapes and sizes without using any mould, through the day and the night.

She did not lose her moods or her patience when at night the power went off. Rama continued her work with full dedication and determination in candle light.

In all she made 999 idols of the Lord in 24 hours, out of which 9 idols were made blind folded. It is a great achievement and a wonderful record.

There was the display gallery also where 99,999 idols previously made, were displayed and the display was extended by a day on public demand. The display included Ganesha in different poses: standing, sitting, sleeping.

Considering herself completely consumed in the art, Shah’s devotion began after the Lord appeared in dreams in 2000.

Rama Shah, 39, a staunch devotee of Lord Ganesha, made 9999 idols in 99 days-setting the world record for the Most Ganesha Idols Hand Made in 99 days Video