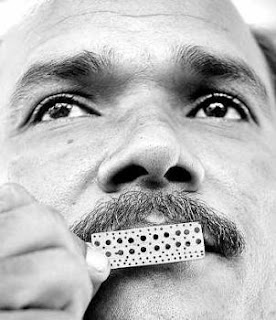 Striking a different note in the world of music, a man from Kerala has entered into the Limca Book of Records for developing the smallest musical instrument, through which scores played on saxophone or ‘nadaswaram’ (double reed wind instrument) could be produced.

The Limca certificate which Mr G. Jayaprakash, designer of the instrument, received last week, said, “He (Jayaprakash) has developed the smallest musical instrument called ‘Sushiri’ …and developed the art of playing it and has given public performances.”
With 4.5 cm length, 1.5 cm width and 1 mm thickness, ‘sushiri’ resembles the shape of a miniature mouth-organ.

Capable of playing all seven musical notes with it, the gadget produces music similar that of instruments like saxophone, clarinet, shehnai and nadaswaram, Jayaprakash told PTI.

“It is the outcome of my 15-years of rigorous research. Actually I did not mean to develop such a small instrument. My aim was just to mould a different one. But, in course of time, I realised that the clarity of music would increase with the decrease of size and weight,” he said. Made of sandalwood, ‘sushiri; has a number of holes on its surface. It is played by controlling the movement of air through the holes with peculiar movements of fingers and lips.

A thin piece of cloth is used as a cover and a button microphone will be attached to it while playing, Jayaprakash said.

“I usually play ‘Sushiri’ by holding on the clip of microphone. But, the sound is crystal clear even without it. I use the cloth and microphone to protect it from getting damaged as the instrument is too small. The holes on the surface are also specially aligned to produce all types of sound varieties,” he said. Though Jayaprakash, a Thiruvananthapuram-based pharmaceutical manufacturer, has no formal education in music, he performs hour-long concerts — both Carnatic and western — with ‘Sushiri’.