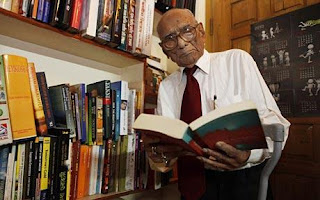 A teacher, a lawyer, a judge and now back to being a student – 100-year-old Bholaram Das has just enrolled for his doctorate, perhaps becoming India’s oldest university student .

Das has got admission in a PhD programme at the Gauhati University in Assam – an announcement he made at a public function organised by his family and friends to mark his 100th birthday Saturday.

“There is no age limit for acquiring knowledge,” Das said with a smile, dressed nattily in a brown suit and tie.

And the subject for his doctorate is as interesting as the man himself — the role of his native village Bohori in Barpeta district in western Assam in the spread of neo-Vaishnavite movement, an egalitarian stream of Hinduism, propagated by Sankardeva.

Das was jailed when he was just 19 during the freedom movement against British rule. He spent two months in prison before he graduated in the commerce stream and later went to study law.

“I had a very fulfilling 100 years, having been a teacher, dabbled with politics by joining the Congress party way back in 1945, became a lawyer, then a magistrate, and retired as a judge in 1971,” Das said.

The centenarian’s zeal to get a PhD degree has stunned many.

“It is indeed heartening to find people like Bholaram Das in today’s world and I am of the firm belief that he should stand out as a role model for the generation next,” Governor J.B. Patnaik, who is also the chancellor of Gauhati University, told IANS.

Aided by a walking stick, Das is still agile and loves watching cricket matches on television, besides being an avid reader.

With five sons and a daughter, 10 grandchildren, and a great-grandchild, Das is a contented man.

“I love to smile and be happy always,” Das said as he slipped into his study.