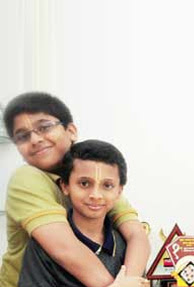 Neel Joshi, 13 and his brother Deep, 11, class eight and class six students of Thakur Vidya Mandir School at Kandivali East in Mumbai are on their way to become India’s youngest MBA graduates as they have finished their first semester MBA with distinction from an institute affiliated to a U.S. varsity. The teen prodigies are pursuing their MBA from the Indian Management School and Research centre (IMSR) affiliated to the University of Northeast Virginia, reports Bangalore Mirror.
While Neel has cleared his first year in Finance Management with 91 percent, Deep has cleared the first semester of MBA in Operation Management by securing 75 percent.

It was a meeting with the representative of IMSR at an education fair, which helped them realize their dreams. “I had taken a risk in admitting the boys against all rules,” admits Pravin Parmar, director, IMSR. “They have both scored very good marks and I am confident they will become the youngest MBAs in the country,” he added.

“We had sought admission for MBA courses at the University of Mumbai and various other institutes in USA and UK. But everyone turned us down saying we were too young to enroll for management courses. They also told us we must approach them after post-graduation and gaining three years of working experience,” says Neel.

Deep said, “I joined the institute but never worried about the results. I only aimed at studying management. My brother and I dream of getting a prize from President Pratibha Patil after we complete the course. I am also preparing for my MBA first year final exam which is scheduled in January.”

The boys had exhibited extraordinary talents at their very young age. They could recite entire chapters from the Bhagvad Gita, Hanuman Chalisa and even the Rig Veda when they were in kindergarten. They have also shown their excellence in extracurricular activities such as carom in which they represent Air India at national level events. Neel wants to become a cardiac surgeon, while Deep wishes to be a pilot. The boys’ father Ajit Joshi is a civil engineer.