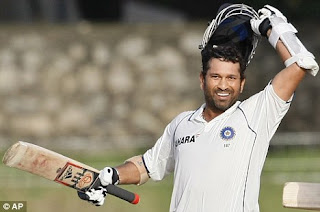 Sachin Tendulkar on Tuesday became the most-capped player in Test cricket history and now has almost every batting record to his name. Commencing this piece with the most striking part of cricket history re-written by the maestro, Sachin is the first batsman in history to score over 50 centuries and most overall runs in international cricket (ODIs, Tests and T20s) that currently stand at 31,350, leaving behind his closest rival Ricky Ponting by 5,851 runs.

Before stumbling onto his cherished records, the one that’s most disheartening is the number of times he has fallen short of the three-figure mark in international cricket. Sachin holds the record of getting out the maximum number of times on 90s. He has been dismissed 24 times (17 in ODIs and 7 in Tests) on the scores of 90 to 99. On one occasion in ODIs, he remained unbeaten on 96. The 18 nineties in ODIs is an ODI record as well.
Starting from the foundation of his mountain of runs, Sachin remains the only player to score a century on debut in Ranji Trophy, Irani Trophy and Duleep Trophy.
Sachin has particularly liked the Australian attack when it comes to the record of aggregating most runs against a particular opponent in all forms of international cricket (Tests, ODIs and T20s). Sachin has aggregated 5,753 runs against Australia with 19 centuries and 25 fifties at an average of 50.46.
Here’s a rundown of Sachin’s records in Test and ODI cricket:
Sachin Tendular Cricket World Records for Test Cricket Matches

– On his Test debut, Sachin Tendulkar was the third youngest debutant (16 years 205 days). Mushtaq Mohammad (15 years 124 days) and Aaqib Javed (16 years 189 days) debuted in Test matches at a younger age than Tendulkar. Since then, there have been two players who were younger than Sachin on their Test debut: Hasan Raza of Pakistan (14 years 227 days), the current youngest debutant, and Mohammad Sharif of Bangladesh (15 years 128 days).
– Sachin has played the most number of Test Matches (169) in Test cricket.
– Sachin is the highest-run-scoring player in Test history with 13,742 runs.
– The little master became the first player to surpass the 12,000 and 13,000 Test run marks.
– He is the second Indian after Sunil Gavaskar to make over 10,000 runs in Test matches.
– On January 3, 2007, Sachin Tendulkar (5,751) edged past Brian Lara’s (5,736) world record of runs scored in Tests away from home. Sachin achieved this in 75 away Test matches while Lara scored his runs in 66 away Tests.
– The Indian icon has the highest number of Test centuries (48). He overtook Sunil Gavaskar’s record (34) in December 2005 vs Sri Lanka in Delhi. Ricky Ponting is the second with 39 centuries.
– When Sachin scored his maiden century in 1990, he was the second youngest to score a century. Only Mushtaq Mohammad had scored a century at a younger age by 1990. Tendulkar’s record was bettered by Mohammad Ashraful in 2001-02 season. The record for previous youngest Indian centurion was held by Kapil Dev.
– Sachin’s record of five centuries before he turned 20 is a current world record.
– The legend holds the current record (217 against NZ in 1999-00) for the highest score in Test cricket by an Indian when captaining the side. Gavaskar held the previous record (205 against West Indies in Bombay in 1978-79).
– Tendulkar has scored centuries against all Test-playing nations. He was the third batman to achieve the distinction after Steve Waugh and Gary Kirsten.
– Tendulkar has the distinction of scoring most fifty-plus innings – 103 (48 hundreds and 55 fifties) – which remains the world record for any batsman. Ricky Ponting is the next with 91 fifty-plus scores.
– Sachin is the fastest to reach the following thousand-run marks in terms of Test innings: 8,000 runs (154 innings), 12,000 runs (247 innings), 13,000 runs (266 innings) and joint record holder with Brian Lara for 10,000 runs (195 innings each).
– The Mumbai player has the distinction of scoring the most runs at number four position in Test cricket. In 223 innings, he has amassed 11,534 runs at his favourite batting position with the help of 42 hundreds and 46 fifties.
– He holds, with Rahul Dravid, the world record for the most hundred partnerships (18) by a pair in Test cricket.
– He has appeared in 17 double century partnerships – a world record
– Tendulkar played his first 32 Tests on different grounds.
– He holds the unique record of having appeared in most won (56) and most lost (45) Tests for India.
– He is the only batsman to have aggregated 1,000 runs against seven different countries in Test cricket.
– The master blaster holds the record of most runs in between two dismissals with 497 runs in 2003-04 season (spread across three Tests and five innings with the sequence of 241 not out, 60 not out,194 not out and 2).
– Tendulkar is the first Indian to score 300 runs in a Test without getting dismissed.
– Sachin is the only batsman to have scored at least two centuries against all other Test playing countries.
– He has completed his hundred with a six on four occasions in Test cricket – a world record he shares with Ken Barrington.