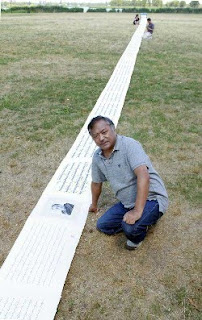 The Longest Calligraphy Scroll in the World is 163.2 meters long and contains long life prayers composed for His Holiness the fourteenth Dalai Lama by 32 great spiritual masters of Tibet.

The Longest Calligraphy Scroll in the World has been previously exhibited at the Tenzin Gyatso Institute in the presence of International Bestselling author Sogyal Rinpoche and the Special Envoy of His Holiness the Dalai Lama, Lodi Gyari Rinpoche.

Born in Lhasa, Tibet, Jamyang Dorjee Chakrishar studied in Tibetan refugee schools in Shimla and Mussoorie, India. He worked as a senior Bureaucrat for the Government of Sikkim, India and later joined the Central Tibetan Administration of the Tibetan Government in Exile in Dharamsala, India.

Jamyang is currently based in Nepal and works as the Regional Program Coordinator for the Conservancy for Tibetan Arts and Culture (CTAC).