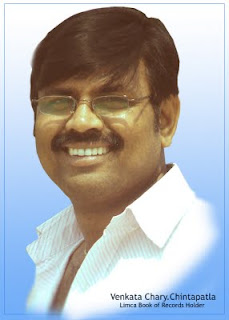 The vertical lines with spaces certainly have a pattern. Something like a barcode on a book. But these cannot be read by the electronic gadget in a mall.
Close an eye, slant the paper to a certain degree and watch. The lines and spaces suddenly metamorphose into legible and coherent sentences. Welcome to ‘Line Script’ invented and practised by Ch. Venkatachary, an interior designer.
Wielding his Rotring pen and using the drawing sheets, Venkatachary practised his art for the last eight years and managed to get into the Limca Book of records after he ‘line scripted’ Ramayana, Mahabharata, Quran and the biography of Dr. BR Ambedkar. Now it took more than three months for him to convert the biography of Y.S. Rajasekhara Reddy into a line script book.
Venkatachary, the resident of Lalaguda now plans to send across the book on Rajasekhara Reddy to his family members.
What made him invent and practise what could be a painful method of writing and reading? “I was inspired by the cursive writing style of Bapu. I had to create something without any clutter and yet surprise the reader,” he says.
Interior designer by profession, Venkatachary has line script writing prowess in eight different languages including Tamil, Malayalam, Kannada, Punjabi, Urdu, English, Hindi and Telugu.

“It takes years of hard work to master this type of writing. Since 80s, I have been practising and fine tuning this style,” he says. Venkatachary hopes to line-script the biographies of 100 great personalities of India. He plans to complete this mammoth project in the next three to four years.

Draughtsmen, artist,Craftsmen,all persons with magic in their hands,Here you have a craftsman with a diffrence .40 years old Venkata chary Chintapatla is an artist of a diffrenct kind who has invented the art of line script. An art never heard of created with perfect dexterity of his talented hands. This script when given a glance projects a picture of only vertical line.When inclined to a 45, angle the alphabets in whatever language is seen clearly. For Venkata chary it was just a hobby, Later after making himself perfect in English languages in this scrpipt for which he took five months he decided to try his hand in other language. Now he is master in eight indian languages.

What is Line Script :
I created a unique art form using lines and spaces which make no sense when views normally. However, when viewd at 45 to 75 degree angle, the line and dashes take on meaning . I perfect in 8 Indian languages