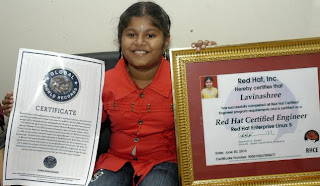 M. Lavinashree has won the acclaim of being the youngest professional by passing the Certified Professional (MCP) Prometric Examination with 842 marks out of 1000.

“I broke the world record set by a 10-year-old Pakistani girl, Arfa Karim Randhawa, as the world’s youngest MCP professional, as I am only eight years old,” she says in all innocence.

When she was in Std. II, she joined a one-year multi-media course that made her well-versed in animation, Corel Draw, Photoshop, Illustrator, Flash, Dream Weaver and Web Designing.

National Child Award for Exceptional Achievement, 2006, for Lavinashree’s exceptional ability in the field of recitation of 1330 Thirukural, conferred by the Government of India.

Appreciation from His Excellency, the President of India, Dr.A.P.J.Abdul Kalam, for her excellent memory capacity.

Publication of M.Lavinashree’s excellent memory power in the world famous Wikipedia Encyclopedia under the category: List of Child Prodigies (Memory/History) 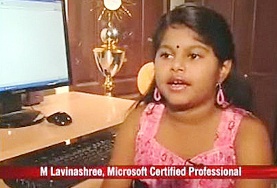 Since she showed interest, her father, K. Muniyasamy, sent her for MCP coaching classes. The teachers took special care and prepared her to sit for the examination.

Her cousin, Kannan, who is in the U.S., encouraged her.

“It comes naturally to her. She is playful and we don’t compel her into anything,” he says and adds that she begins her day at 6.30 a.m. and spends about two hours learning computers.

She entered the Limca Book of World Records when she was three years old. She also received the National Child Award for Exceptional Achievement, 2006, conferred by the Government of India, for her exceptional ability to recite all the 1330 Thirukkurals
.

She wants to become a scientist like A.P.J. Abdul Kalam, who is her inspiration.