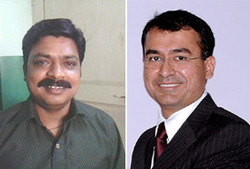 In what can only be termed as a medical marvel, Dr Ashish Rawandale-Patil, a urologist from Dhule, Maharashtra, gained a place in ‘Guinness Book of World Records’ on Oct 20 for removing a record number of 172,155 kidney stones from a single kidney.

The world record feat was carried out on 8 December last year at the Institute of Urology at Dhule, when Dr. Ashish performed the Herculean task of removing over a lakh stones from a single kidney of his patient, Dhanraj Wadile.

He added, “The certificate from the Guinness Records officials only came 10 days ago so we waited this long to make the announcement. We are very excited.”

Wadile suffering from rare birth defect
Wadile, 45, had been enduring acute pain for over six months and had stopped eating and going to work. He had consulted numerous doctors and was also taking medicines
for the pain before he approached Dr. Ashish.

A thorough examination revealed that Wadile was suffering from the rare birth defect called Pelvi-Ureteric Junction obstruction where his kidney was abnormally positioned in the pelvic and had an obstruction.

In addition, the clinical investigations revealed the patient
had a large number renal stones.

After the patient was cleared as medically fit, the doctors worked out the details of the surgical procedure to be performed.

A 4-hour complex operation
The doctors used both open surgery and flexible endoscopy in the complex four-hour operation. The team of medical experts working on Wadile was amazed at the number of stones that were removed from the patient.

Wadile felt relieved immediately after surgery. The stones removed comprised of calcium oxalate and calcium phosphate and varied in size from one millimetre to 2.5 cms.

Dr Patil stated, “The surgery was complicated due to the number of kidney stones. It was difficult to remove so many stones from his kidney. These stones were anywhere between the size of 1mm to 2.5cm.

“The possibility of leaving some stones behind was one of the risks as it could have jeopardized the surgery. Bigger stones had to be tackled individually. We also did a plastic surgery to widen the opening of the kidney.”

The counting process of the stones took nearly three daily for well over a month to be completed.

Dr Patil stated, “I then wrote to the Guinness Book of World Records and they asked me to send the stones and related documents. They verified it and wrote back to me in October telling me that I have made a record”.

He added “This is an important milestone for me and my institute. It is the combined effort of my team that could take this small town to an international level.”