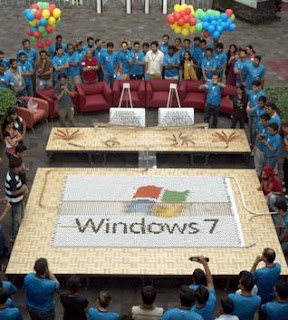 The fall of a chip sets off a cascading effect. As the chips lined up in formations fall, a wave is created and vibrant colour pattern emerges. It was not a mean task at Microsoft’s Hyderabad Centre. The falling chips made a dazzling display of the logo of Windows 7, the operating system made available on October 22 last year.

This was the way a team of 22 Microsoft employees celebrated the first anniversary of the general availability of Windows 7 and the effort enabled Microsoft storm into the Limca Book of Records for the first ever dominoes display of its kind in India. The Microsoft Dominoes effect required 7,000 wooden dominoes, each weighting 12 gm and placed barely 0.2 inches apart sidewise and 0.5 inches lengthwise to create the logo.

“Placing each domino took an average of three seconds a person. We were extremely tense and knew that a small mistake would cost us 20-30 minutes of effort. To our relief, the event went off really well, with over 1,000 employees witnessing the chips fall from all around the atrium floors and create a dazzling display of the Windows 7 logo. It was seamless!” said team member Tanvi Ritwik.

The idea of organising a domino display was generated in a brainstorming session of Microsoft employees of Windows & Windows Live Group at Microsoft India Development Center that had worked on some key features of the Operating System. The team, led by Archis Gore, spent nearly 1056 hours (from planning to the culmination of the event). The effort required the same precision engineering and team work that product development does.

A Microsoft release quoted Limca Book of Records Editor Vijaya Ghose as saying: “This is the first ever display of dominoes in India and is a symbolisation of perfect coordination and exceptional synergy among team members.”