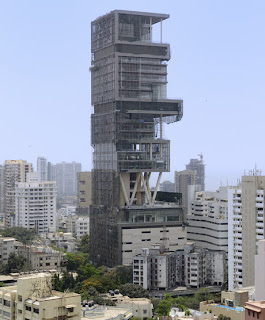 While for the last couple of years nearly everyone has been saying that the era of architectural excess has passed, that doesn’t appear to be the case for at least one man in India. The Antilia, a 27-story tower has just recently been finished and opened in Mumbai, the new home for the world’s fourth richest man, Mukesh Ambani. The first billion-dollar home, and now the world’s largest, was designed by the Chicago-based architecture firm Perkins & Will, and features a full gym, at least one large swimming pool (though likely a few smaller ones here and there), six floors of parking, countless bedrooms, helipads (three of them), a movie theater, and well, the building is 27-stories, so you can imagine that it has most everything a regular house has, 27 times over.
Ambani, his wife and three children have moved into the building which is named Antilia, after a mythical Island. It contains a health club with a gym and dance studio, at least one studio, a ballroom, guestrooms and a range of lounges and a 50 seater cinema.There is even an elevated garden with ceiling space to accommodate small trees.

The roof has three helicopter pads and there is also underground parking for 160 cars, which will come in handy for guests at Ambani’s forthcoming housewarming party.

From the top floors of the 173m high property are spectacular views of Mumbai and of the Arabian Sea.

The 53 year-old tycoon is not only the richest man in India but the fourth richest man in the world. In total there is reported to be 37,000 square metres of space, which is more than the Palace of Versailles.

According to Forbes magazine Ambani, who owns much of Reliance Industries, the oil, retail and biotechnologies conglomerate, is worth £18bn. He used to help run the company before falling out with his brother.

The glass, steel and tiles used to make the building are reported to be from local sources.
Ambani does not appear to be influenced by calls by the Indian prime minister, Manmohan Singh, for business leaders to be “role models of moderation”.