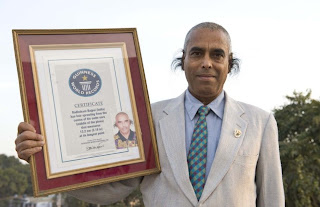 Radha Kant Bajpai, a one-time Guinness Book record holder from Uttar Pradesh’s Kanpur city is attempting to break his own Guinness World record for growing the longest ear hair in the world.
55-year-old Bajpai made his first world record in 2005 for the same.
“I used to think of Guinness world record, but at that time my ear hair was only 5 to 6 centimeters long so I asked for advice from my relatives and some of my journalist friends, who told me that if you grow your hair till 10 to 12 centimeters then you can apply for the records,” said Bajpai.
“So I achieved this measurement of 13.2 centimeters at the age of 50 and achieved my record,” he added.
Bajpai’s relatives said they are extremely proud of his achievements.
“This is a great achievement. At first the society used to taunt him that why he is growing his ear hair, he won’t receive any record for this. I used to tell them that one day he will get some result out of it,” said Shiv Shakti Pandey, a relative of Bajpai.
“But then by gods grace, Bajpai made a record and the same people today say that he has really achieved some thing in his life,” he added.
The length of Bajpai’s ear hair has grown 28 centimeters long now.
Longest Ear Hair in the World Guinness Book of World Record 2010 Video
Tags: Ear Hair