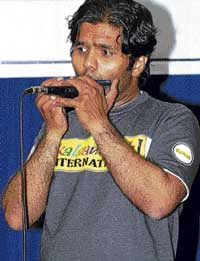 Whether they want to get their names into the Guinness Book for improbable feats or eccentric exploits, one has to admire their determination to succeed.

Shailesh Kumar Sethiya played the harmonica for 12 hours and 20 minutes continuously to break the existing Limca record of 12 hours. With this feat, Shailesh says that he has made it to the Limca Book of Records and is all set to enter the Guinness Book of World Records on May 1.

“For the past 18 years, I learnt to play the instrument from my father. In fact, it was my parents who motivated me to work towards this milestone,” he says. It was only three years ago that he became truly proficient in the instrument and decided to raise the bar as far as performance went.

“I started practising for two-three hours everyday. I then contacted the Limca book people and according to their guidelines increased my practising time to eight hours. I also added yoga and pranayama to my daily regime to help increase my stamina and breathing,” he explains.

Shailesh played a whole range of light film music from seven different languages continuously only taking a total of 30 minutes break in the entire time frame.

“It was uncomfortable in parts especially when I got some chest pain due to the strain on my lungs. However, I kept going because of the moral and emotional support from my family and well-wishers,” he says.

Now that he has made it to the Limca Book of Records, Shailesh is all geared up to crack the Guinness Book soon. “I will be at Ambedkar Bhavan on May 1.That’s where I hope to achieve my goal which I have been aiming for a long time,” he says with  determination.

MAXIMUM TIME PERFORMED ON-STAGE FOR SINGING CONCERTS BY ANY SINGER UNDER THE SAME BANNER.