A spectacular show on water screen using effects of fire, sound laser, water and video at Akshardham Temple in Gandhinagar, Gujarat, left 2,000 spectators spellbound on Saturday.
The first of its kind immersive show — a fusion of high-end technology and India’s cultural heritage —was exhibited in the multi-media format on a water screen primarily consisting of water droplets. “With a view to educate the masses of the glorious Indian culture, the show captures the spiritual message of an Upanishad story,” said Swami Maharaj, head of Bochasanwasi Shri Akshar-Purshottam Swaminarayan Sanstha, which organised the show.
“It is a unique blend of technology and spirituality as the quintessential scientific mind of a boy tries to interpret the boundary between life and death,” said R Chidambaram, a nuclear scientist. 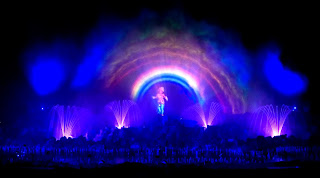 The 45-minute programme, Sat-Chit-Anand, conducted on a 60-ft wide water screen was a united effort by sadhus of the temple who conceptualised the central story. Its creative director is Yves Pepin of the 2008 Beijing Olympics fame (artistic advisor).
But what held the audience captivatedwas the conversation between nine-year-old Nachiketa and lord of death Yama. In the latter’s abode, they talk about eternity, life after death and the three worlds.
Use of colourful lights and high-powered projectors helped in depicting a ghostly atmosphere with anacondas squirming at the gate of death, spikes coming from nowhere to kill the child, dancing demons, fire, volcanic eruptions and lightning — all on the water screen.
The use of 4,000 nozzles, 2,000 lights, over 100 pumps and twelve fireball throwers supplemented quick change of locations — from hell to heaven and cosmos. The show also made for a comical viewing for children. 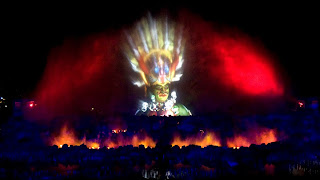 Apart from the apsaras, the bantering between the kid and ghosts, rainbows, flora and fauna, cartoon characters, demons, colourful fish and butterflies seemed like flying straight out of crayon paintings. They made circular movements on the water droplets around the boy as Yama enticed him with the lure of heaven, wealth and all worldly pleasures.
The crowd was also impressed by the sound system, which created a 360-degree effect.
To see Sat-Chit-Anand Water Show / Fountain Akshardham-Gandhinagar
Akshardham Temple
Sector-20, J Road, Gandhi Nagar,
Akshardham,
Gandhinagar – Gujarat, India
(Monday Closed for Public)
Sat-Chit-Anand Water Show / Laser Fountain Show Live Video Akshardham